Three articles published in the press and online

Three articles published in the press and online, two in the Scotsman 200 series, and another an opinion piece posted on Scotland in Union’s website:

What does the United Kingdom mean to me? 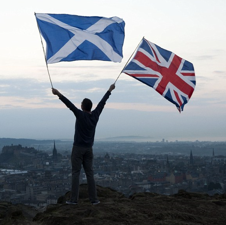 In a world of such uncertainty, change and at times downright turmoil, there is much to be said for recognising the value of what we have. For many, feeling a part of the United Kingdom is an innate and natural thing. We consider it, and all the parts of it, as our home, so in a very tangible way the UK plays an important part in defining who we are.

Historians can tell us how the UK and its people came to be shaped, through good times and bad, including wars and sometimes dramatic social change. Equally, economists can explain the financial flows between each part of the UK, so that at different times in our history people all across these islands have shared in its resources and prosperity.

In the diverse worlds of science, the arts and sport, there are numerous examples of how the interchange of ideas, skills, expertise and funding have enabled some of the greatest achievements of the whole of the UK, as well as each of its constituent nations.

In the sphere of enterprise, the great businesses that have thrived here, across the generations and more recently in the newest of start-up businesses, invariably find their success dependent on the potential offered by the UK market as a whole, as well as its place in the world.

Then there is tradition, culture and those individual characteristics that speak to some of the uniqueness of the parts of the UK, but then together form what the world imagines when it thinks of us as a whole. This is symbolised in a Union flag comprised of the crosses of St George, St Andrew and St Patrick, with each part depending upon the others to form the whole.

Yet as important as all these things are, for the individual the UK tends to mean so much more. In Scotland, most people have family, friends, colleagues or customers of their businesses, in the rest of the UK. Standing on the Scottish border watching cars and trains going freely too and fro, and airplanes overhead, it is so obvious that we are all part of one great nation state as well as part of the distinctive country that we choose to live in. Our loved ones and those we care about might be spread far and wide across these islands, but we draw comfort from knowing we are all part of one overall entity. There is an interdependency that families and friends can rely unquestionably upon, that also exits amongst the peoples living throughout these lands, recognising kindred spirits in our fellow citizens, no matter their race, creed or background, built simply on a common belief in who we are.

For me, being part of the UK is as much personal as about location, giving me a sense of belonging to a wider and greater endeavour, that has tried over the generations, to make a positive difference in the world. I believe this has been demonstrably and overwhelmingly a good thing.