The Scottish Independence Referendum debate – ‘exemplar’ or an unfolding tragedy? 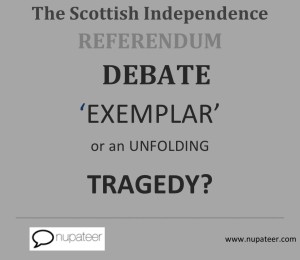 How best to sum up this debate that has to varying degrees held the public consciousness for the last couple of years? Recently, after another round of online abuse for someone speaking out for what they believe, the First Minister Alex Salmond, after dismissing the abuse with something along the lines of ‘daft people will say daft things’, said that nevertheless we must remember that this debate should be considered an ‘exemplar’.

The First Minister is surely being disingenuous when he says this, for he of all people knows how the tone and content of the Independence Referendum debate could have been handled very differently. Back when Alex Salmond and Nicola Sturgeon sat down to consider how to shape the ‘Scotland’s Future’ document they had choices. I imagine Civil Servants explained the options and their implications and no doubt spoke of a line that should not be crossed. Was it a breakthrough moment when Alex Salmond and Nicola Sturgeon decided to ignore that line altogether? Or was it rather a gradual creep as issue after issue was cast in a style that dispensed with balance and informative clarity and instead gave us divisive and idealised misinformation?

On the day of the launch of the ‘White Paper’ some reporters commented that there was less razzmatazz than might have been expected, that the presentation had been almost muted. Was this because the First Minister and his Deputy were conscious of the enormity of the day for the future of Scotland, or was it because they had their fingers crossed, hoping to get away without uproar and indignation at the breath-taking liberty they had taken with the public purse and even more importantly the lack of regard they had shown for the responsibilities of public office?

For some months now I have been pursuing a complaint against the Scottish Government in relation to the misuse of public funds and resources on the ‘Scotland’s Future’ document. In my complaint I say that this was in large part SNP manifesto and nationalist propaganda rather than a White Paper and as such it should have been funded directly by the SNP or the Yes campaign.

Of course there is nothing new in my claim. Some will conclude I am only pursuing a complaint because I am on the ‘No’ side of the Independence Referendum debate. Others will wonder why I am still bothering with this when the White Paper was published in November and so far no one in authority has acted. Should we take the silence on the part of a range of relevant public bodies, regulators and responsible authorities to mean that they are content that all has been done by the book? In any case, with the 18th September fast approaching, and the waters having arguably been muddied meanwhile by the various publications from the UK Government, surely it is now time to leave this alone?

To some my persistence on this matter will look eccentric at best or delusional at worst. Not least the First Minister whose Office is currently considering how to deal with the latest version of my complaint. Perhaps they will view it as a sort of irritating ‘hot potato’ that has been tossed between those in public office trying not to be caught out having to give an official view on it.

For me there are two individuals whose influence has pervaded this debate in a most unfortunate way. The link between them is how adept they each are at what might be called the dark arts – not of politics, but rather the manipulation of people. One is our First Minister, who relentlessly pursues his personal vanity project to secure a place in history as the man who breaks up the United Kingdom and turns the clock back by over 300 years in the process. He has done this with a total lack of care for the consequences for the rest of us and has had the audacity to use public funds to put out his propaganda. Then in the darker recesses of the internet there is Stuart Campbell, or Rev. Stuart Campbell as he likes to be known, the computer game expert who has built a special one for this debate calling it WingsOverScotland and using it as a means to stir up the feelings of cybernats, who then run loose on social media to do their worst. I notice the First Minister has yet to denounce this unpleasant individual or his website – no doubt he prefers to characterise this all as just ‘daft people saying daft things’. After I found myself in the crosshairs of WingsOverScotland, my wife and I had a few sleepless nights after directions to our house were circulated amongst the followers of this site amidst a mini tirade of abuse and intimidation. It seems from what others have had to face since that we got off lightly.

So, ‘an exemplar’, First Minister? I don’t think so. For me it is more of an unfolding tragedy when we see those at the highest levels of public office in Scotland misuse their power, while others on the fringes simply use abuse and intimidation to try to impose their will. There have been some positives in the debate First Minister, but these have been matched by deep flaws that you must take some of the blame for. When you seek to win by promoting divisive nationalism you know you will draw out some degree of tribalism as a result. When you seek to break up a country, to separate families and friends, businesses and their customers, to break apart what has succeeded over generations and to do so not with an honesty of purpose but rather with misleading guile, you cannot expect us all to remain quiet. I do not believe the majority are silent, they are just less noisy and more inclined to be sceptical when told what is best for them. The majority are sensing that this debate has lurched into a vociferous minority seeking to impose their will on the rest. Meanwhile the polls suggest that for all the intervening rhetoric and noise, the ‘No’ vote on the 18th September could well be the same as it would have been two years ago.

So has it all been worth it? I gave up a job I loved in the public sector to be able to speak freely. Many others have had to risk more, and far too many have suffered at the hands of those who prefer to shout down and ridicule rather than try to engage in proper debate. Whatever the result on the 18th September we must all be determined to make the best of what comes next. I for one hope that we can all put the noise and rancour behind us.

By Keith Howell on www.nupateer.com