The 2 Elephants in the Room 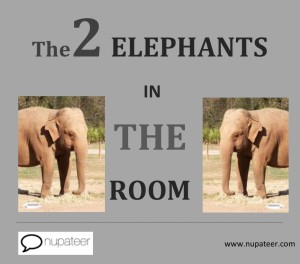 As the 18th September approaches, the Scottish Independence debate has intensified. The leaders of the two campaigns have had their first televised debate, and both sides have claimed victory. Most agree that nothing new has really been added. All the key issues have been discussed to the point of stalemate. While both sides claim the other is being unreasonable in their stance on these issues, none of that really helps the ‘undecideds’. According to opinion polls ‘don’t knows’ generally account for 10% to 20% of us. It will likely be them who finally push the overall result one way or the other.

Who or what are they? These 2 elephants that the ‘Yes’ campaign like to pretend are not even there? No, I am not talking about the currency, or the terms of EU membership, or the costs of setting up a separate country. Nor am I referring to higher taxes, the unfunded promises, or just how many times we are going to spend the oil money trying to plug all the gaps.

Both of these elephants have been in the room before the proper debate even started. The first elephant is asking a question. Did we meet even the most basic of conditions for needing to seek independence before we started talking about breaking up the United Kingdom?

I am amongst what I hope will be the clear majority of people in Scotland, who seem set to vote ‘No’ on the 18th September. But if any of us thought that we are treated worse or had less opportunities than people elsewhere in the UK , simply because we are Scottish or live in Scotland, then I am sure we would vote ‘Yes’ without hesitation. However, people in Inverness, Glasgow and Dunbar are not typically in a worse position than people in Newcastle, Belfast and Brighton. The opportunities open to us and our children and our children’s children are fundamentally the same right across the UK.

Of course, the SNP like to stir up imagined or exaggerated grievances between those of us here in Scotland and people in the rest of the UK. But basically these grievances are more imagined than real. We all live very happily and successfully together and have done for generations. While like any society things are not perfect and we do have problems, there is no reason to suggest that separating ourselves apart from our fellow countrymen and women in England, Wales and Northern Ireland, will make these problems any easier to overcome.

Indeed, there are plenty of reasons to think that if we break up the United Kingdom, things at least for the medium term, could become much more difficult. Both for us here in Scotland and equally for our families and friends in the rest of the United Kingdom, as we all deal with the aftershocks  of separation. On day 1 after breaking up the United Kingdom we will have at a stroke greatly limited the direct opportunities for our families, businesses and people generally, as we reduce the overall entity that Scotland is currently such a critical and positive part of.

There are of course circumstances where seeking independence can make good sense. If you are oppressed. If you are discriminated against because of who or where you are. Yet the people of Scotland are not remotely oppressed, are not discriminated against for being Scottish, have as much access to democracy, influence, and opportunities as anyone, anywhere else in the United Kingdom. Indeed, arguably in some respects we are better placed. As for the problems we do have, other than perhaps the weather, they have nothing specifically to do with who we are or where we are.

So, the first elephant in the room has been asking us by its presence, whether we meet even the most basic of reasons for seeking independence in the first place, and from the beginning it has been clear that the answer is ‘No’.  The SNP realised this from the start, so decided there was only one way to deal with this particular elephant. Given that the reason for the SNP’s existence is to break up the United Kingdom, its view of the first elephant is clear. Just act like it is not even there.

Then there is the second elephant. Again it is standing in the room. And has been there, since before the debate really got going. And the ‘Yes’ campaign are keen for us not to even think about it, let alone talk about it. This elephant is nationalism. The reason why this debate is happening when even the most basic of reasons for seeking independence have not been met, is the tunnel vision of the Scottish nationalists. Nationalism can come in all sorts of shapes and sizes. Indeed over the years the Scottish nationalism that is the second elephant in the room, has progressively tried to ‘reimagine’ itself to try to be more socially acceptable, hoping not only to seem friendlier and more positive but also to draw attention away from the essential tenets that still underpin its thinking.

The nationalism of Alex Salmond and the SNP is still founded today, as it has always been, on an underlying deceit that Scotland and being Scottish are of themselves somehow better than other countries and peoples, and that only by separating ourselves from those we have lived happily and successfully with other generations, can we go on to become even better than everyone else.

There is an ugly tribalism at the heart of all shades of nationalism. The evidence that this Scottish nationalism is no different is there every day in the abuse and intimidation to be found on the internet awaiting any who try to speak out against them. Particularly if like me you have an English accent. After 23 years of living happily in Scotland, I have for the first time as I have spoken out in this debate, been told in no uncertain terms that my accent is a problem and that I should go back to where I came from if I cannot ‘support Scotland’.

In the Scottish nationalism of 2014, the policies intended to draw in progressive and left leaning people to their cause, are sold on a cynical  rationale that we in Scotland care more about poverty, the environment, the general welfare of people and getting rid of nuclear weapons, than do people in the rest of the United Kingdom. I believe I am in a majority who reject that as nonsense, knowing full well that people throughout the United Kingdom and of every political persuasion, want to find ways to overcome poverty, improve the environment, see us all prosper and yes ultimately see an end to nuclear weapons. But none of those things needs us to break up the United Kingdom.

Indeed, I believe our best chance to progress these causes in a meaningful way – rather than in a potentially symbolic but empty way – is to do so together, as we have tackled so many issues over the course of generations.  For example, I am not prepared to turn my back on disadvantaged people in Manchester, Cardiff or Hastings, they matter just as much to me as people in Edinburgh, Dumfries or Dundee. Also, in these small group of islands off the west of Europe, I know it only makes sense to seek to improve the environment throughout the United Kingdom. It requires a particular insular and perverse view of our place in this world, to imagine that seeking to improve only the Scottish part of these islands, whether in regard to the environment, nuclear weapons, or indeed general economic prosperity is any kind of meaningful step forward.

There are other questions that might be asked. Some that Alex Salmond would I am sure like me to answer. For example, will I leave Scotland if do not get the result I want on the 18th September? No. I would be saddened by the choice, but I would stay and make the most of it. And then there is the line of questioning that he tried to catch out Alistair Darling with in their debate. Along the lines of ‘Do I agree that Scotland could survive as an independent country?’ To which my answer is ‘Yes’. Indeed ultimately, not just survive but I would hope, thrive. But first, both here in Scotland and in the rest of the UK, we would have to go through some years of enormous uncertainty and upheaval, damaging both economies in the process. I believe it would be a very difficult start for an independent Scotland, but we would work through it, and go on to eventually recover and make the best of it.

But equally, I have no doubt that we would all know quite soon after a break-up of the UK, what a terrible mistake we had made. While we would eventually start to progress, we would all know in Scotland and in the rest of the UK that it would have been so much better if we had stayed together. If we had chosen to keep the best of both worlds. Continuing our uniquely Scottish version of what it means to be British within this most successful union of nations, and benefiting from all the very best of what the people and countries of these British isles can be.

Oh, and then there is one final question. One that Alex Salmond would rather not hear. Will I keep quiet about the way that the SNP Government has sought to mislead its own people, misusing public funds and resources in the process? No. You see, there are 2 elephants in the room, but there is another one next door in the office of the one who considers himself the First amongst all Scots. I intend to make sure everyone knows about that elephant too. Your Office has now had my full detailed formal complaint for 7 weeks Mr Salmond. You cannot miss it. It is that elephant standing in your room. I am claiming a breach of the Ministerial and Civil Service codes. Your civil servants have been gagged. When will you reply?

By Keith Howell on www.nupateer.com