No Thanks for a Generation 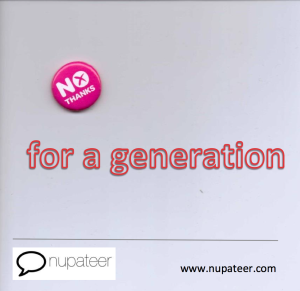 During the last two years of the Scottish Referendum debate, the nationalist leadership often ‘explained’ how their opponents were thinking, or told us what they were saying. It is easier to sneer and deride if you can put objectionable words into someone else’s mouth or contemplate self-serving thoughts in their minds.

This has continued after the vote. Now that ‘Yes’ did not win the day they are telling us why it is that we decided to vote ‘No’. This is all part of a wider re- imaging of the Referendum campaign on the part of the ‘Yes’ side of the debate. They are portrayed as the paragons of hope and virtue while their opponents were apparently too full of fear and economic self-interest to do what was ‘right for Scotland’. I have looked at some of that in a lengthier article published at the same time as this, but here I would like to address one particularly troubling conceit that is being promoted by the nationalists.

Well, let us be absolutely clear on that. Of the 80 or so opinion polls during the last couple of years, all bar one gave a majority in favour of a ‘No’ vote. Additional devolved powers only became a more significant issue in the closing months of the debate, brought into sharp relief in terms of the accelerated timetable in the last couple of weeks. But that does not change the fact that the great majority of the 2 million who voted ‘No’, were going to vote ‘No’ throughout the campaign. At the edges some ebbed and flowed between the two sides, but most were going to vote ‘No’ whatever the detail of future devolved powers.

The nationalists are trying to re-write history on what we have all voted for. They imply we voted ‘No’ primarily dependent on more powers coming to Scotland. While that might be the case for a minority, there is something that I am clear the overwhelming majority of those who voted ‘No’ believed about the fundamental basis of the vote. Watching and considering the debates, exchanges and reports throughout the campaign, along with numerous conversations with those minded to vote ‘No’, it was clear. The one absolute that is the most common point of agreement amongst those who voted ‘No’ to the proposal to separate Scotland from the rest of the UK, was that we were voting to decide this matter for a generation.

This understanding of what we were all doing was reconfirmed by the nationalist leadership again and again throughout the campaign. To break that pledge within a day or so of the Referendum result is a great betrayal of the democratic will of the people of Scotland. No amount of playing to the gallery about the nuances of the fine detail of newly devolved powers or the timing of their delivery, will take away from that. The 2 million people who voted ‘No’ on the 18th September voted NO THANKS FOR A GENERATION. Any attempt to renege on that will reveal the reality of those who simply seek to manipulate the democratic process for their own ends.